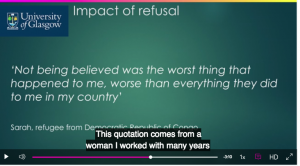 Prejudice is an affective way of seeing and categorising:

Prejudice is “a feeling, favorable or unfavorable, toward a person or thing, prior to, or not based on, actual experience.” (Allport, 1954: 6). Prejudice is a negative attitude toward a cultural group based on little or no experience. A type of prejudgment based on a person’s presumed group membership. Over-generalisation is a common response to new experience – use of schemata/categorisations to deal with experience. An over-generalization prior to experience is a prejudgment.

Prejudgment becomes prejudice if it is not reversible when exposed to new knowledge. If a person is capable of rectifying his erroneous judgments in the light of new evidence he is not prejudiced. Prejudgments become prejudices only if they are not reversible when exposed to new knowledge. A prejudice, unlike a simple misconception, is actively resistant to all evidence that would unseat it. We tend to grow emotional when a prejudice is threatened with contradiction. Thus, the difference between ordinary prejudgments and prejudice is that one can discuss and rectify a prejudgment without emotional resistance. (Allport, 1954: 9)

Types of prejudice and examples:

Utilitarian – easier to hold the same values as others in your group rather than reject them, even though they are wrong e.g., sharing family prejudices about others.
Ego-defensive function – holding a prejudice because you don’t want to believe unpleasant things about yourself e.g., you do not want to accept your own inadequacies (in the workplace), so instead blame migrant colleagues as being unfit for the job.
Value-expressive – prejudices reinforce highly valued aspects of a person’s life. e.g., fundamentalist Christians believe in one true God, and thus, people who worship other Gods are seen as wrong. Or ethnic cleansing (Serbs against Muslims or Nazi Germany) to retain racial stock
Knowledge – holding certain prejudices allows people to organise the world in a way that makes sense to them – just as stereotypes enable us to organise our world. So, if you think that one particular ethnic group are lazy in the workplace, then you can ascribe that trait to others from the group that you meet. You automatically ascribe them with that trait.